NSRC Personnel Activities Around the World

May 6 NSRC staff will teach an online IXP Seminar for CNRST.

May 10-12 Philip Smith and Md Abdul Awal will be NSRC's instructors of the intERLab- BKNIX Peering Workshop that will be held during the BKNIX Peering Forum - BPF 2021in Thailand.

April 15-16 NSRC staff will participate in ESnet CI Engineering Lunch & Learn Series. Hervey Allen and Hans Kuhn will present an overview of the NSRC, and Md Abdul Awal will give a presentation about global BCP for routing policy and security during the online event.

April 6 Steve Huter and Hervey Allen will meet with Pacific Northwest Gigapop Advisory Council where they will present the NSRC.

March 29-April 1 Phil Regnauld of the NSRC will be one of the instructors of the ICANN - ANRT DNSSEC Workshop to be held online.

March 18 Philip Smith of the NSRC will participate in MANRS tech talk RouteViews: Why It's a Must-Have for Network Operators as part of ISOC Seminar series.

February 22- March 4 NSRC staff will teach tutorials and give presentations during APRICOT 2021 that will be held virtually. Hervey Allen will be the instructor of the Network Monitor and Management 2.0 Tutorial. Phil Regnauld will teach DNSSEC Operations Tutorial. Sebastian Büttrich will teach the Wireless Development Tutorial . Phil Smith and Md Abdul Awal will be the instructors of the BGP Deployment Tutorial . Md Abdul Awal will give a presentation about RPKI invalids aren´t going away .

February 1 Philip Smith of the NSRC, will be the instructor of the online Routing Infrastructure & Security Operations Workshop during APAN 51.

November 23-27 NSRC's instructors Hervey Allen, Carlos Armas and Antonio Lobo will teach the Network Monitoring and Management Workshop during WALC 2020 that will be held virtually.

November 10-20 Hans Kuhn will be representing NSRC in the IETF 109 meeting that will take place in Bangkok, Thailand.

October 12-14 Md. Abdul Awal (Mozilla NSRC Fellow) will give a tecnical presentation: RPKI invalids aren't gone yet, and he will also be the instructor of the Hands on DNS and DNSSEC Tutorial during bdNOG 12 that will be held online.

October 2-9 Hervey Allen and Philip Smith will give a presentation on RPKI/Routing Security during LACNOG 2020 meeting that will be held online.

July 20-31 Hans Kuhn will participate in the online IETF 108 Meeting.

July 7-8: Hervey Allen, Carlos Armas, and Antonio Lobo of the NSRC will be the instructors of the online Network Management and Monitoring Workshop organized with LACTDL.

March 22-27 Hans Kuhn will participate in the online IETF 107 Meeting.

February 26-28: NSRC will sponsor Joanna Merson of University of Oregon to assist with Infographics in the Workshop on Active Internet Measurements: Knowledge of Internet Structure: Measurement, Epistemology, and Technology (AIMS-KISMET) that will take place at the University of California San Diego in La Jolla, California, United States.

February 17-21: Steve Huter, Patrick Okui and Sebastian Büttrich along with Marco Zennaro and Ermanno Pietrosemoli from the NSRC and the International Centre for Theoretical Physics (ICTP) will teach and assist in a Workshop on LPWAN Solutions for the Internet of Things at Makerere University in Makerere, Uganda.

February 12-21: NSRC will be teach Campus Network Design and Operations Workshop, Routing Infrastructure and Security Operations Workshop, Virtualisation Workshop, and Fun with perfSONAR Tutorial during APRICOT 2020 that will take Melbourne, Australia. Merike Kaeo and Md Abdul Awal of the NSRC, will gave presentations during the event.

January 10-14: Md. Abdul Awal of NSRC presented on The impact of an RPKI validator in Bangladesh and will also be one of the instructors of the IPv6 Deployment on MikroTik Workshop during bdNOG 11 that will be held in Cox's Bazar, Bangladesh.

December 13: Abdul Awal, NSRC fellow presented about The impact of an RPKI validator in Bangladesh during npNOG5 that will take place in Lalitpur, Nepal.

December 9-13: Steve Song was an invited speaker for the CTU Workshop during IEEE Globecom 2019 that will be held in Waikoloa, Hawaii, United States.

December 9-12: NSRC staff Steve Huter, Dale Smith and Hervey Allen assisted to the Internet 2 2019 Tecnology Exchange Conference and will participate in the NDT and perfSONAR Developer Discussion to be held in New Orleans, Louisiana, United States.

December 2-6: Philip Smith of the NSRC, lead Campus Network Design Workshop during pacNOG25 that will be held in Suva, Fiji.

November 11-12: Patrick Okui of the NSRC attended and presented during MoreNET 2019 to be held in Mozambique.

November 6-12: NSRC staff, Philip Smith will teach a 3-day BGP Peering Workshop at LINX-London Internet Exchange headquarters. He will also make a presentation about the IXPs in Asia during LINX 107 that will take place in London, United Kingdom.

October 28- November 1: NSRC staff and contractors Philip Smith, Patrick Okui and Anne Saine will teach a 3-day NREN NOC Workshop during UbuntuNet Connect 2019 that will be held in Antananarivo, Madagascar.

October 21-28: NSRC will participate in MozFest 2019 with Hervey Allen as a speaker during "Lighting Talks". The event will take place in London, United Kingdom.

October 21-25: NSRC's instructor Patrick Okui will teach the Network Monitoring and Management Workshop as well as the Advanced Routing Workshop during RwandaNOG 2019 that will take place in Kigali, Rwanda.

October 10-11: Philip Smith of the NSRC will teach the RPKI Workshop in California, United States.

September 16-21: Hervey Allen and Hans Kuhn of the NSRC are the instructors of the Network Management and Monitoring Workshop and the Routing Infrastructure and Security Operations Workshop during the Mongolian Network Operators' Group Conference mnNOG 1 that will be held in Ulaanbaatar, Mongolia.

August 16: Hervey Allen and Hans Kuhn of the NSRC will attend the West Coast Utility Commissions - Wildfire Dialogue with Professor Doug Toomey, University of Oregon, in support of ongoing AlertWildfire initiatives in the State of Oregon.

June 25-28: Philip Smith of the NSRC will teach Campus Network Design Workshop during PacNOG 24 to be held in Apia, Samoa.

June 16-20: Steven Huter and other NSRC staff will attend TNC19 that will take place in Tallinn, Estonia.

June 9-21: AfNOG will be celebrating it's 20th anniversary during the 2019 AfNOG / AIS workshops and meetings to be held in Kampala, Uganda. NSRC collaborators or staff may assist.

June 8-9: NSRC staff will provide direct engineering assistance to the College of Natural Resources - CNR of the Royal University of Bhutan in Lobesa.

May 9-11: Philip Smith of the NSRC will lead a BGP Peering Workshop to follow the BKNIX Peering Forum. The workshop is to be held with the Asian Institute of Technology's intERLab and their training staff.

May 7: Philip Smith of the NSRC will participate in the 2019 BKNIX Peering Forum to take place in Bangkok, Thailand.

April 8-10: Antonio Lobo of the NSRC will lead a DNSECC Workshop that will be held in San José, Costa Rica.

March 18-29: Hans Kuhn will assist with the buildout and support of IETF 104 meeting to be held in Prague, Czech Republic. Hans will work in the IETF NOC during the event and attend some sessions as well.

March 18-22: Joe Abley and Brian Candler will teach a DNSSEC Workshop in coordination with NiRA and ICANN in Lagos, Nigeria.

March 18-20: Hervey Allen and Steven Huter will attend the CENIC 2019 meeting to be held in San Diego, California. Hervey Allen will present (with John Hess of CENIC) on "FIONA Workshops Series: Results & Next Steps" during the meeting on Monday, March 18.

March 16-17: Hervey Allen and John Hess (CENIC) will teach a 2-day workshop prior to the 2019 CENIC meeting in San Diego, California on perfSONAR and use of MaDDash, GridFTP, Security, ScienceDMZs and more.

March 9-14: Steven Huter of the NSRC will attend the ICANN 64 meeting to be held in Kobe, Japan.

March 5-8: NSRC staff Steve Huter and Dale Smith will attend the Internet2 Global Summit to be held in Washington, D.C., USA as well as partake in the NSF NSF IRNC PI meeting. NSRC is sponsoring two NSRC-Internet2 Joint Fellows to attend this event. These are Khamphanh Sithavong from Laos and Rajan Parajuli from Nepal. 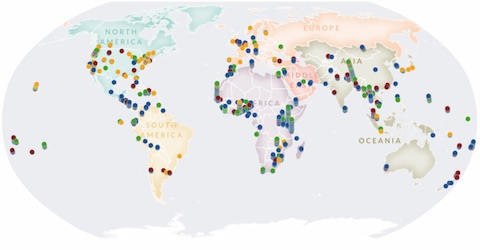 Our repository of historical, web and network-related materials maintained by the NSRC since 1989. View our Archived Materials.